Aerotech I 327 DM metal storm 38mm 720 reload. left the pad with authority, made it to MECO then pressure separated. I have determined a mix of a light payload bay, to loose of a slip fit for the payload and not a large enough vent hole. this is my daughter's largest park flier weighs in at 1480grams with a Loki G66r motor on the pad. I am fixing the 3" zipper that occured, the main chute ripped the swivel apart, after the JLCR hit the fin on the way down the airframe and smashed to pieces. I had the back plate with the kevlar tether but the rest is MIA in the grass field. the rocket made it to 1450', seperation happened around 1000', the baro sensor has a huge spike in velocity, possibly as the payload whipped around to 1500fps, OR had predicted 850fps.

flown at 60 acres park in Redmond Wa, good flight got stuck in low braches of tree but quickly recovered 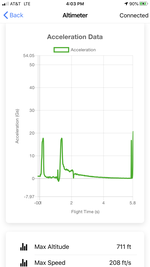 A3-4T. This time shock cord burned through. *sigh*. Body returned quickly but not ballistically. No other damage. 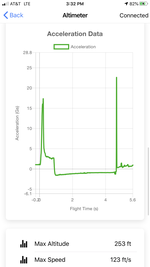 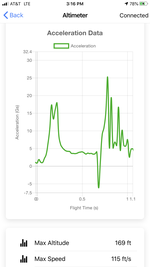